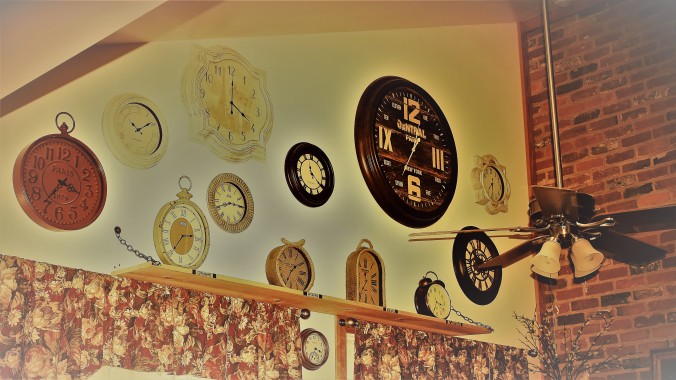 As clearly indicated in this photo of my ‘elevated’ clock collection…time really does fly! Otherwise, how the hell did so much time go by between posts?  Oh sure, a snippet here, a snapshot there, but basically…crickets!

Soooo much has happened since my last real update.  But, as I recall (who am I kidding?  I recall nothing…I had to re-read my last posts to catch up with myself!) we’d basically gotten out of our house and into Mom’s, only to turn right around and do it again when her house sold the very weekend we moved in.  So, the crunch was on to find the new house to accommodate everyone’s wants, needs, and pocketbook…no easy task in the best of circumstances much less with less than 45 days to find (finally), contract (ouch), inspect (ahem, is that supposed to do that?), appraise (oooh look hon, we already made a hundred bucks!), and close (ha…they get 5% for that?).

Then came the moving part…and actually, I have nothing to say about that except it went pretty darn well considering the parties involved (namely….me!)

Of course that’s not to say we didn’t have our adventures.  Most certainly we did, but after we moved in, which was a nice change (for about 30 seconds!). And a post for another day perhaps.

But, to this point, we did find a character-laden property out in the boonies of King William County (and we all know what ‘character’ means yes?) quickly realizing we’d just moved into a time warp.  And not in a good way! Suffice to say we move more Forward to the Past than Back to the Future  🙄

How you ask?  Wellllll…remember dial-up?  Listening to the pings and bongs and dings and dongs as we waited patiently (hahaha) for a connection to that new and wonderful and mind blowing experience called ‘the internet’?

Okay.  So we’re not there but what we DO have is Dial-Up-Yours Darrell’s asshat cousin ShitForBrains satellite internet!

Oh Rhett…Gone with the Wind are those lazy hours of streaming and binge watching Netflix.  Instead of watching Frankie and Grace hippy-fy the high brow, I’m watching the usage meter deplete faster than a three year old can make a Twinkie disappear.

No more swinging a Swiffer like she’s Ginger (oops…like he’s Fred 😳  ) while singing with Pandora where every channel is the best channel ’cause it’s MINE!

Gone is Dancing with the Real Stars on The Weather Channel Live because that’s been replaced with sitting Shiva to my dearly departed High-Speed Hank so I can spend quality time with my new frienemy, Manual Update in the lonely hours between 2 and 8 a.m.

What’s worse I ask…the frustration, the boredom, or the lack of sleep…I just can’t decide.

I miss my FIOS

I hate that I do

p.s.  if you’ve nothing better to do, the links in this post are to some of my aforementioned adventures in moving.  just sayin  🙂