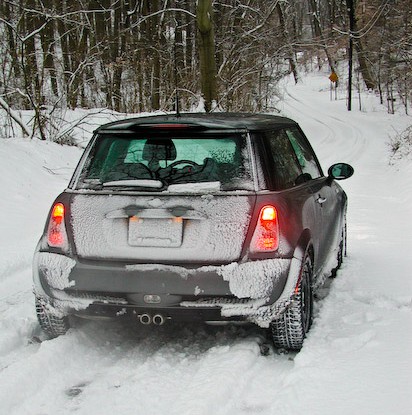 When we last spoke about Mini Me’s Misadventurous adventure…the Misogynistic Mini Mechanics had replaced her engine and assorted internal organs, but left her night-blind in one eye because I wouldn’t pay them $79 bucks to change her bulb.

That aside, Mini and I had a bit of a Me to Mini convo, where I told her I was taking her into a Mini-Mechanic Free Zone so she better be on her best behavior.

If not…I was abosofrigginlutely ready to take her into the woods and introduce her Bonnet to her Boot, if you catch my drift.

She apparently didn’t want her face to meet her arse because we made it home in one piece and in time for supper.

Do you know where she was on Tuesday?

Back in the shop.

It seems, the poor dear was low on oxygen and needed a new sensor.
(O2 Sensor…get it?)

$405 bucks later, she was breathing freely again, which is good, cause I had a special day planned for that Mini-.

You’ll remember the little convo she and I had before we left the dealership?

So, it is now official…I’ve had my last Mini-break

I’d like to introduce you to my new friend…

I know a place in the woods…
😉