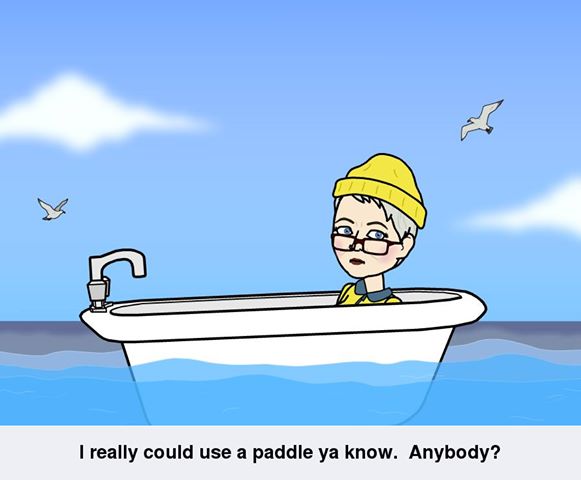 While the recent trauma-drama had not yet completely ‘drained’ from my brain, it had, at least, ‘trickled’ to a minor, albeit steady, unresolved, ‘drip’.

Something akin to Chinese water torture.

However, that said, I was surprised that I was surprised when I found myself, yet again, ‘wading through a ‘puddle of shit’ left behind by another supposed professional’s incompetence!

This time, a new washing machine installation gone horrendously wrong…to the tune of 9,000 bucks (and counting)!!!

[Not to worry though.  The insurance companies are duking it out…and if ours wins, we hope to recover the 3 grand over what the insurance has paid so far to re-build my laundry room and replace 1,296sf of carpet and pad upstairs, along with all the molding, as well as damaged drywall and insulation!  Which of course means I still have basically NO furniture up there and everything still dumped into boxes!  43 Days People!]

To say I was disappointed would be an understatement, I left disappointed in the frozen north about a month and a half ago.

Yeah, I was.  Surprisingly surprised.  HA

Because truthfully?  I thought I was on ‘dry land’ once the move was finally over.  Even though I was still having to deal with those numbskulls at Colonial Van Lines Relocation, Inc. out of Margate Florida on a daily basis…

(oops, did I just reveal the goon squad’s company?)

…I still felt I’d made strides away from the mind-numb “knuckle-dragger pulling me by the hair” chief cave-cook and horn washer, not to mention head buffalo hide pee-er on-er…

…to the “upright walking, slightly behind and to the left of the Neanderthal” can you take me out for a bison burger instead of hacking it off the carcus and throwing it to me to cook cave-slave .

In other words, almost human!

Writing about it here helped; receiving validation for my outrage here helped.

Not quite in charge, but gaining power.

Or so I thought.

While you were reading about the moving shade spinning out of control, I was ‘immersed’ in that new ‘flood’ of bad karma.

I know some who’d say that this is just the way things are sometimes, and that I should just ‘ride the wave’.

Others I know might say I should not let this stress me because all things eventually come out clean in the ‘wash’.

And more still who might believe that at some liquid point between the amniotic fluid and the tidal wave that is my life, I did something mighty wrong and am paying for it now.

Are these the waters “come to cleanse my soul”?

But then, if that’s true, I’m not sure how happy it makes me to think that my salvation lies in the gushing effluent of semi-rural, semi-agricultural Virginia.

How cleansing could they be having traveled the length and breadth, in 200 year old plumbing, before snaking its way through the plastic portals of my laundry room; sent to bathe me in their healing, mystical, all forgiving, powers?

I mean…Noah got rain.  Fresh, pure, clean from the pristine clouds of the pre-industrialized world, never heard of acid rain, sky.  And he only had to deal for 40 days!  I’m already at 43 and I’m NOT done yet!

And I dare say, even HE had a paddle!

I get rusty, fertilizer tainted, used to be filled with poop but now we use chlorine, WASTEWATER!

When is it going to be MY turn?